Commonly called “cut bars” by railroaders, uncoupling levers are not included in most S scale kits and some ready-to-run models. Many brass cars include them, although sometimes they must be attached by the modeler. For our cars, we often have to make our own.

There are two basic types: top- operated and bottom-operated. Older couplers were uncoupled by pulling the locking pin up. The newer types use a rotary motion, below the coupler body, to lift the locking device. Additionally, there are several variations within the top-operated type.

Making cut bars really isn’t very hard; here’s how I do it.

To build these bars I use .016″ (26 gage) brass wire. The wire I use comes on a spool and needs to be straightened. It’s very hard and breaks easily when making 90 degree bends, so I anneal the wire to make it soft. A match will do the job, although a small torch or cigarette lighter will work better. Be careful, since too much heat will melt this small wire. Straight wire of half hard brass, phosphor bronze or iron would work better. Music wire will also work, but your bends must be right the first time, as you cannot straighten it without breaking. Tichy Train Group has .015″ phosphor bronze straight wire that works very nicely. 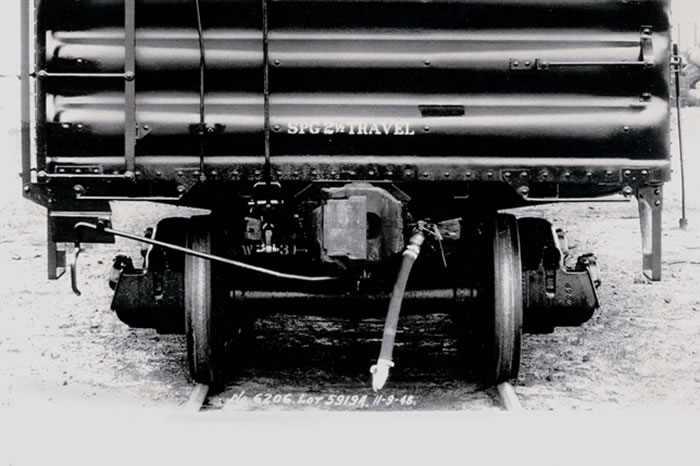 The bottom-operating type is the easest to make, as it only requires one pivot point near the left edge of the car below the poling pocket or where it would have been. First, if there is no place on your model to mount that outer pivot, you need to add a mounting plate made from plastic or metal. Drill a hole in it for the eye bolt and cement or solder in place. Now you can make a bar from .016″ wire. Bend a loop in the end of the wire to fit around one of the Kadee coupler box mounting screws. Then bend the wire toward the trip pin and finally to the left and upward at an angle going toward the eye bolt. Fish the wire through the eye bolt and secure the looped end with one of the mounting screws. Bend the brakeman’s handle down and cut off at 15 scale inches. 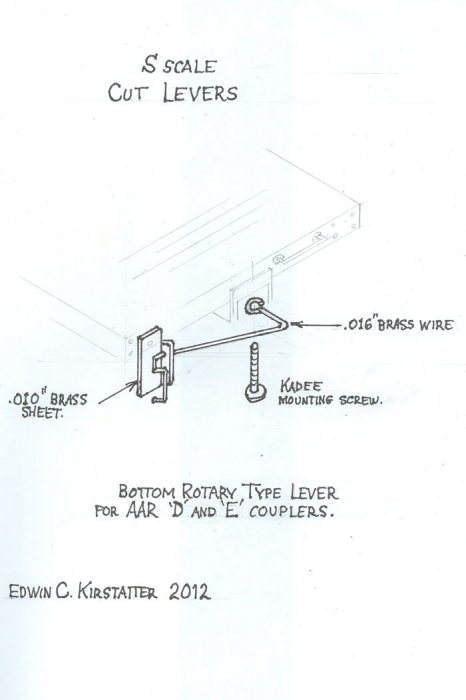 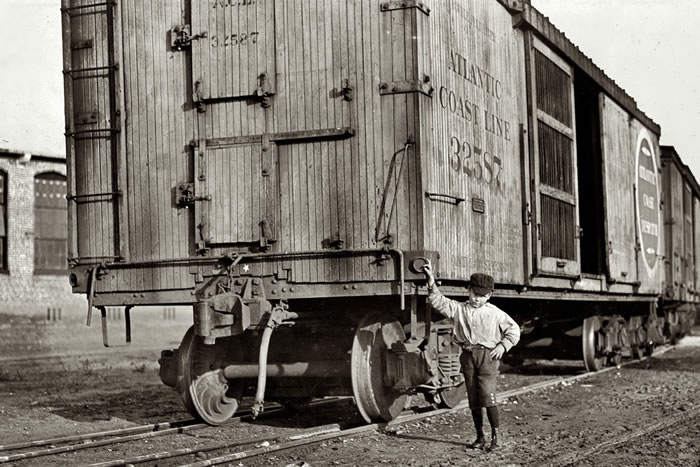 To make the top-operating bar for the “A end” (the car end opposite the brakewheel end), start by bending a small loop at the end of a piece of wire. This simulates where a link, which would have gone down to a prototype coupler’s lifting pin, would be attached. The link will not be represented, as we can’t operate Kadees using these. Now, measure the distance from your coupler’s knuckle pivot pin back to the end of the car. Using this dimension, make a 90 degree bend to the left, keeping your loop horizontal. Now measure from coupler center to the near left edge of the car. If your model has a poling pocket, you will measure to just inside of it. With this dimension, bend your wire down 90 degrees. This will form the handle the brakeman grabs to lift the bar and uncouple the car. Reference the illustrations and prototype photographs included with this article to further understand these bends. Cut the wire off a scale 15″ below the bend. You have now formed your cut bar.

You need two pivot points for this bar, one at each end. For these I use Detail Associates #2206 HO Eye Bolts, or lift rings as they are sometimes called. Mark the car end and drill for these. One will be in the center of the car end just above the end sill. The other will be at the left edge where the bar drops down. String the two eyebolts onto the bar; then press their shanks into the holes you drilled. The shanks of the Eye Bolts are slightly smaller than a #80 drill. Cement them in place with Super Glue, Pliobond or Walthers Goo. You have now completed the A end of the car.

The cut bar on the “B end,” or brake wheel end, is a little different. At the B end, the uncoupling bar passes over or around the handbrake staff. You will have to make a little bulge in the bar at this place to clear the brake staff. 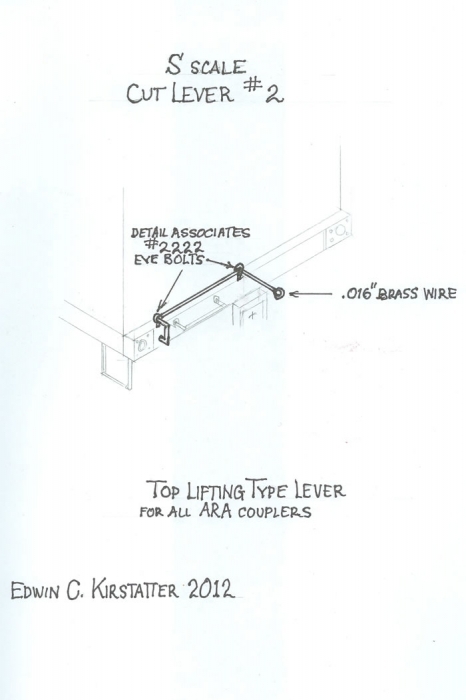 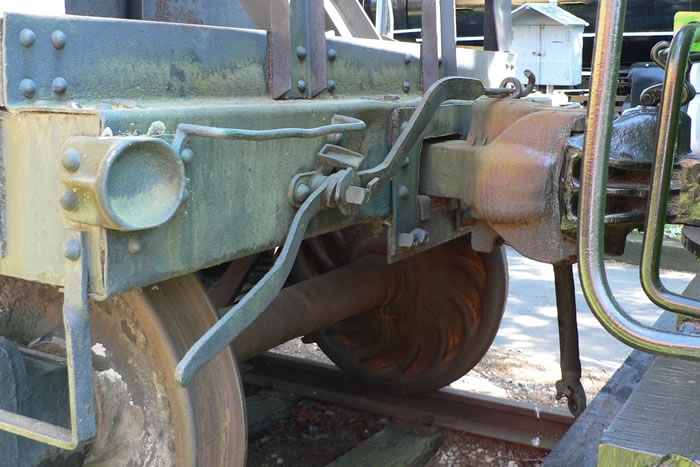 There is another type of top-operated uncoupling bar called a Carmer coupler lifting lever. You will find these on many older cars and especially on the Pennsylvania Railroad. This type has a pivot at about the mid point from car side to coupler. The Carmer coupler lifting lever requires the brakeman to push down rather than lift up. This lever is more difficult to make. I cut the basic shape from .015″ sheet brass. Standard Railway Supply made an etched brass version that is usable and may still be found. 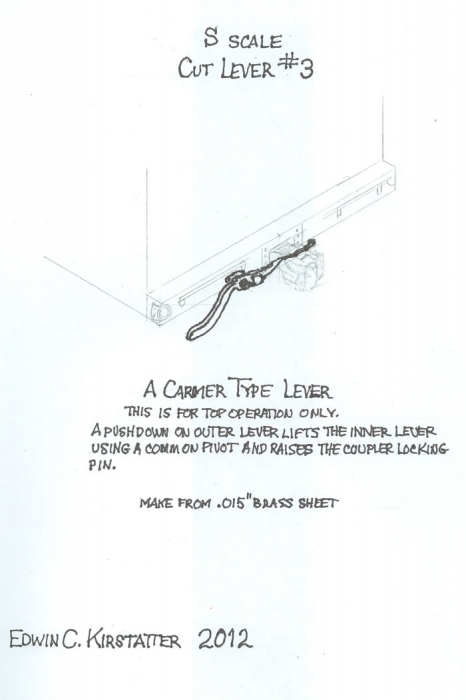 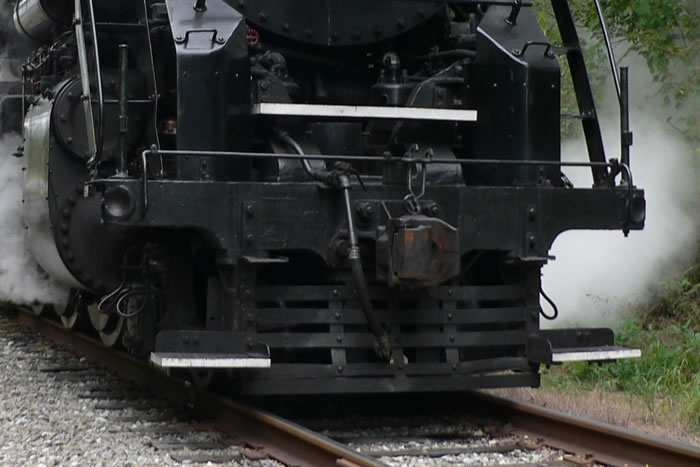 The cut levers used on steam locomotives and diesels are different from those used on cars and the levers used on diesel locomotives differ from those on steamers. The steam loco type, used on both the engine and the tender buffer beam, is a long bar going from one side to the other supported by four cast stanchions, one at each end and two in the middle. The cut bar could be lifted from either side but the brakeman had to lift the whole thing. These cut levers were heavy. Make them from .025″ wire. 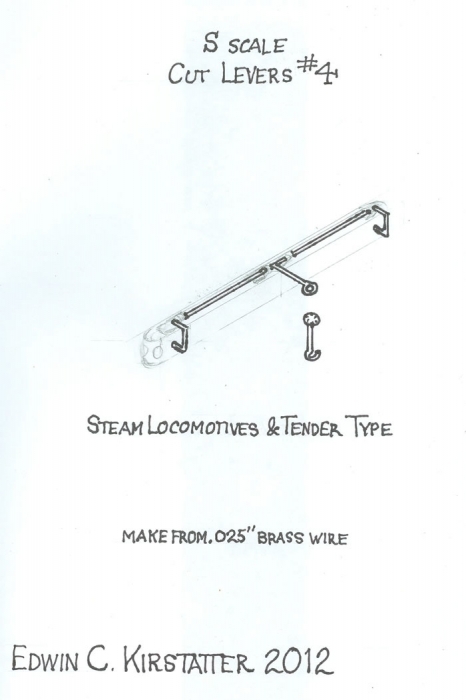 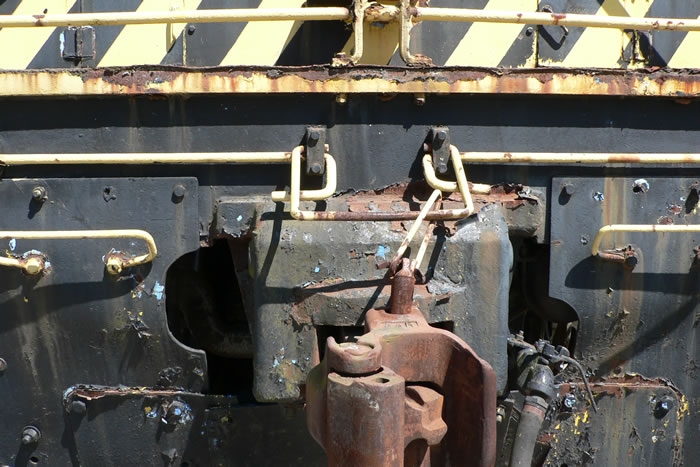 The Diesel locomotive type can also be lifted from either side; however, it differs in that the brakeman is only lifting half of the lever. An independent loop in the center, on which the lifting links slide, is lifted by either side’s lifting lever. Four mounting rings are required to support these three separate pieces. I make them from .020″ brass wire. 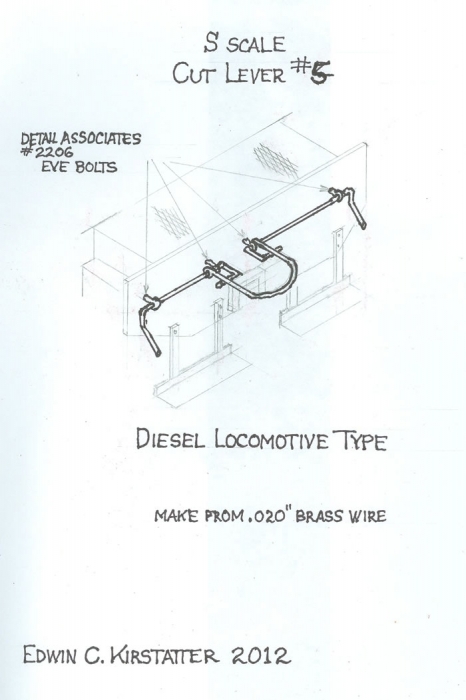 Since the original publication of this article, S Scale modeler Pieter Roos submitted additional examples of cut bars on S Scale rolling stock. His examples can be viewed in the gallery below. –editor 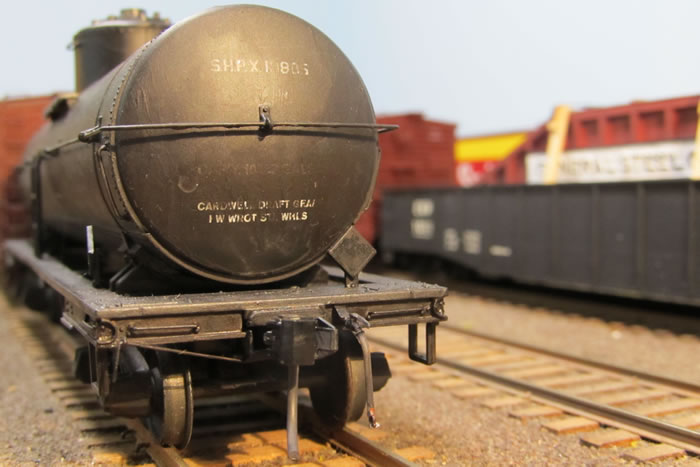 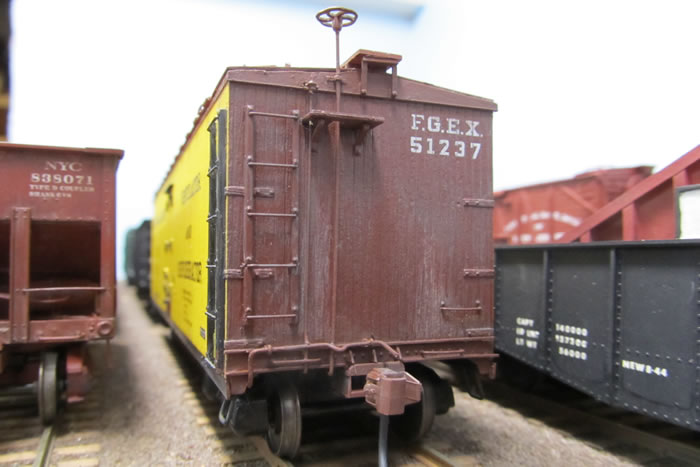 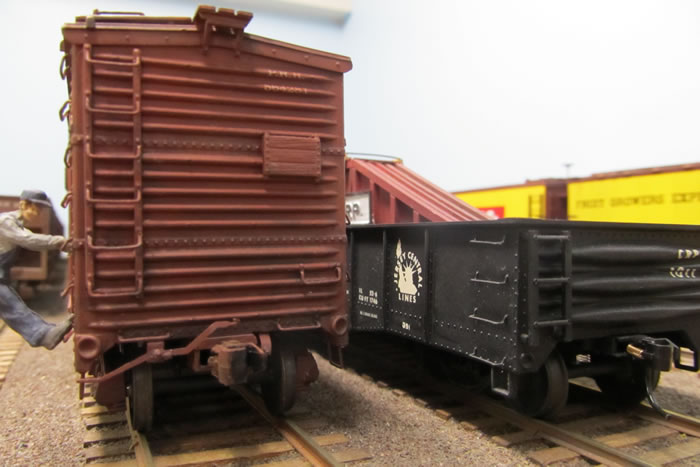