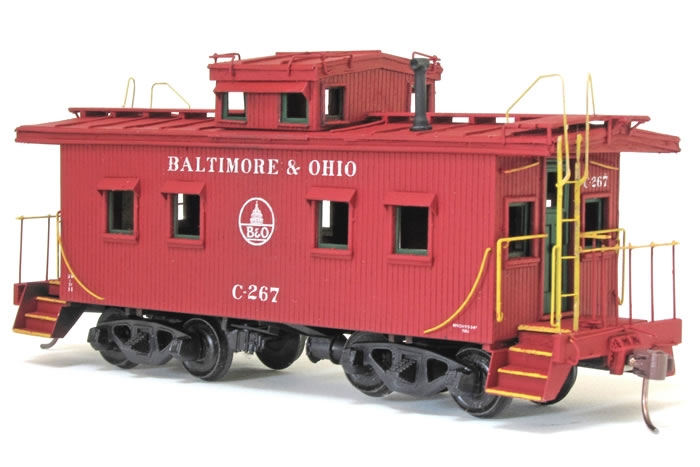 It was a long time coming but S scale now has a beautiful laser-cut kit of B&O’s familiar I-1 caboose, the first model of this prototype ever available in S. The prototype I model, the Buffalo Creek and Gauley of West Virginia, obtained two B&O I-1’s in 1958. It is generally believed that they were gifts to the then BC&G Superintendent, Richard Manning, from a former associate at the B&O. In any case, I was thrilled to learn that at long last I could have an accurate model of an I-1 for my layout. The kit is available in both narrow and wide platform configurations (Figures 1 and 2) and a transfer caboose version is also now available. This is an advanced kit but builds into a beautiful model. 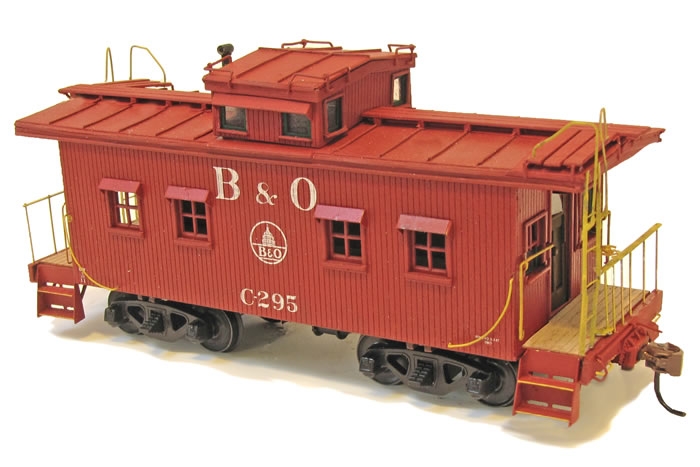 The I-1 kit is produced by Lake Junction Models and is available through both them and Supply Car, LLC. The Supply Car’s owner, Bob McCarthy, was instrumental in making the I-1 kit a reality. When purchased through The Supply Car, the kit can customized by specifying whether AB or K brake details are to be included ($7.00), if scale or hi-rail trucks are desired ($7.95), and whether B&O decals are needed ($6.50). The Supply Car, LLC also sells other S cars and structures in both kit and RTR form. Bill Hoss, owner of Lake Junction Models, has had his own company about four years and has had kits on the market about three years. He currently produces structure and rolling stock kits in HO, N, O and S using laser, photo etched and polyurethane parts. Prior to his current venture, Bill designed kits for over 20 years for a major model manufacturer. Lake Junction Models sells the kit less trucks, couplers and decals.

The kit contains about 175 laser-cut wooden pieces in five different thicknesses ranging from 1/64” up to 1/8”. A good number of these, most notably exterior walls, the window frames, window sills and underbody parts are peel-and-stick. There are three small sheets of parts cut from what is called ‘stencil board’ which are also peel and stick. Also included are three sheets of etched brass parts, window glazing and adhesive backed paper roofing material. There are polyurethane castings for the coupler pockets and the smoke jack, as well. As mentioned, brake rigging details are available, too. Brass wire is included for the handrails. A bending jig is available separately.

The most detailed set of instructions I have ever seen on any kind of model is included on a CD and online at www.LakeJunctionModels.com. When printed out it is 25 pages long. Every step of the assembly is illustrated, not with a sketch or drawing, but with an actual color photo of the model being assembled (Figure 3). These couldn’t be any clearer or more complete. Included with the instructions are a couple of pages of prototype photos showing various lettering schemes used by the B&O over the years on these cars. 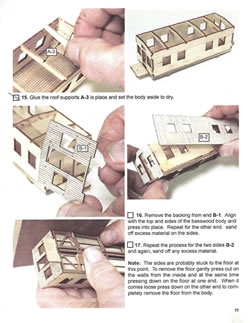 This kit was the first laser-cut wood kit I ever built, so I don’t have anything to compare it to in terms of ease of assembly, accuracy of the parts, etc., but suffice it to say I found the parts to be very accurately sized and all cuts were clean and precise. As is always good practice, I test fit each part before assembly but only on very rare occasions was it necessary to do any substantial sanding to make things fit. In the comments below, I highlight the areas where things did not go exactly as planned, not as a criticism of this fine model, but as ‘lessons learned’ for those who might want to build the kit themselves. 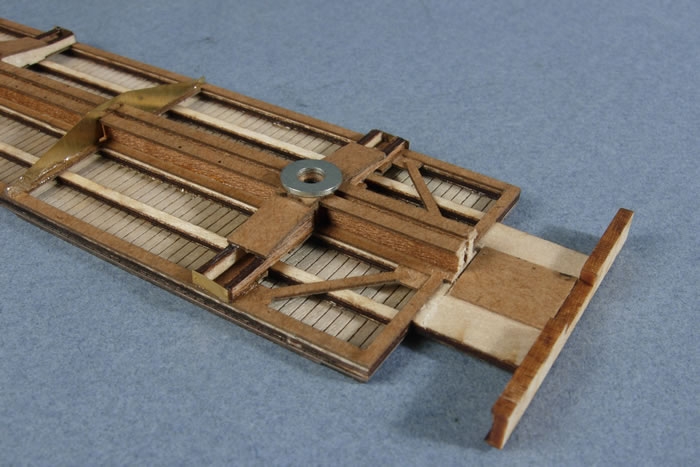 Most of the entire floor and chassis assembly is made up of peel-and-stick parts and so can be put together almost without glue (Figure 4). The floor inside the cabin as well as the floor visible between the frame rails from the underside is scribed to represent individual boards. The platform steps at each corner are each made from one piece of etched brass which is simply folded and bonded to the underbody. Wooden step treads are then added. What looks like a complicated piece of the model actually goes together easily. The instructions call for the couplers to be installed as the very last step in the assembly but I installed them while the floor was still a separate part. This allowed using the needed pressure on the screws holding the couplers in place which would potentially damage the finished model (Figure 5). 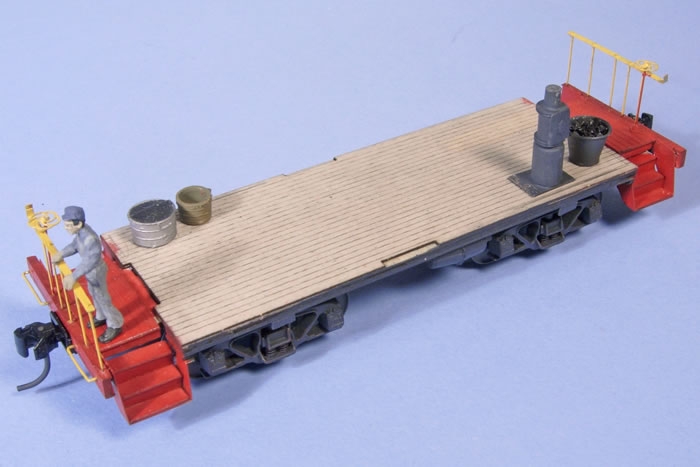 Not surprisingly, the most tedious part of the construction is the hand rails on each end and the grab irons elsewhere. There are clear instructions for assembling the railings and the end ladders, but a great deal of patience is required here. Anyone with experience soldering/gluing railings or ladders shouldn’t have too much trouble. I chose to use plastic ladders from another kit only to speed things up. One word of caution relates to the “height gauge” in Step 59. This gauge is intended to establish the proper height for the horizontal railing on the ends of the car. Unfortunately, it can be positioned incorrectly resulting in railings which are too low. I know, I did it! Be sure and look at the gauge carefully as the lettering printed on the gauge must be upright for the gauge to be oriented correctly. There are instructions for accurately forming the grab irons, including those on the roof of the cupola but frankly these were beyond my level of skill. I fabricated ‘reasonable representations’ for my BC&G model.

The cupola is a bit of a different story. It is made of four pieces of rather thin material and considerable care is required to get the four sides glued up firmly and square. Once the four sides are assembled, however, the remaining pieces, though small, go on nicely and give the cupola a very detailed appearance. It looks like every board on the prototype is represented on the model.

One other area which gave me trouble was the adhesive-backed paper roofing material. I could not get the backing to come off properly and so did not use this material. Instead, I simply covered the roof with crepe-textured blue masking tape which when painted looks like tarpaper. I was very happy with this compromise.

As mentioned, correct trucks are available when the kit is ordered, but these are optional. The underbody is designed to mate with the available trucks resulting in the coupler pocket at the proper height. In my case, I chose to not use the coupler pocket in the kit and simply mounted Kadee #802 couplers. I also had to shim the trucks and the coupler because of my use of hi-rail wheels.

The instructions suggest painting all the parts before assembly and then caution that paint must be removed from surfaces that later have to be glued together. I took a somewhat different approach as I carefully thought through the assembly sequence and determined what parts could be built into sub-assemblies before painting. This approach seemed to work fine. First I buiIt up the floor and chassis and painted it when compete. The underside I painted Floquil Grimy Black and the interior floor I left unpainted to represent a well used floor. The steps and railings were painted red and yellow respectively. I built the entire main body as an assembly and then painted and decaled it. I built up the cupola as another subassembly before painting (Figure 6). I pre-painted the grabirons and ladders before installing them and then did whatever touchup was necessary after installation. 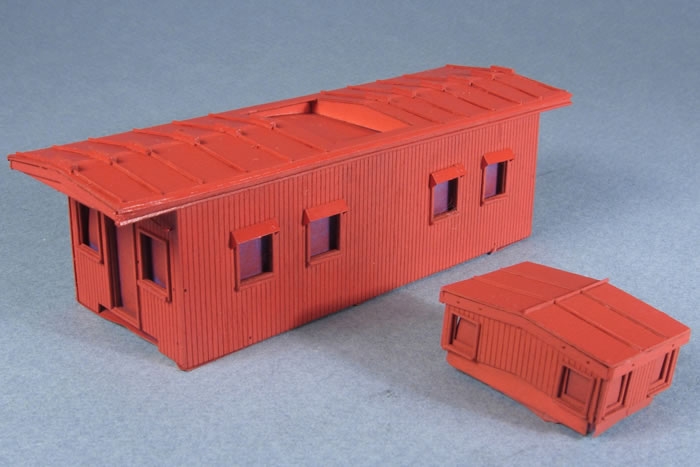 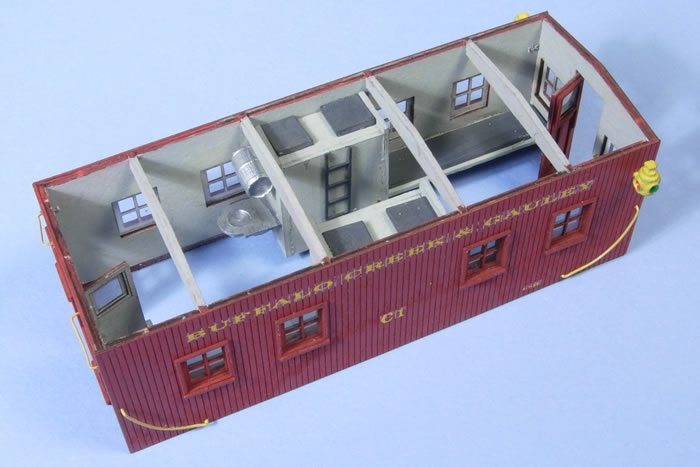 When I started assembling the chassis and saw how nice the individual boards on the floor looked, I felt the model just begged to have an interior. What I decided to do was build a greatly simplified representation of an interior and then leave both end doors open so you could get a glimpse inside (Figure 7 & 8). Of course, you can also see a bit of the interior through the windows. I did not make the roof removable so I could get away with a considerable approximation of the interior. I did a little research on the internet to find interiors of typical cabooses and went from there. I built the center cabinets and restroom and a suggestion of cushions on the cupola seats. At one end I installed a sink with overhead water tank, a potbelly stove, and a built-in table with seats. At the opposite end of the car I put a long bench with a cushion and a couple of buckets of parts and tools. The effect is exactly as I hoped…the impression of an interior without having modeled one in great detail. Just enough light falls through the doors and windows to let an observer see there’s something in there. 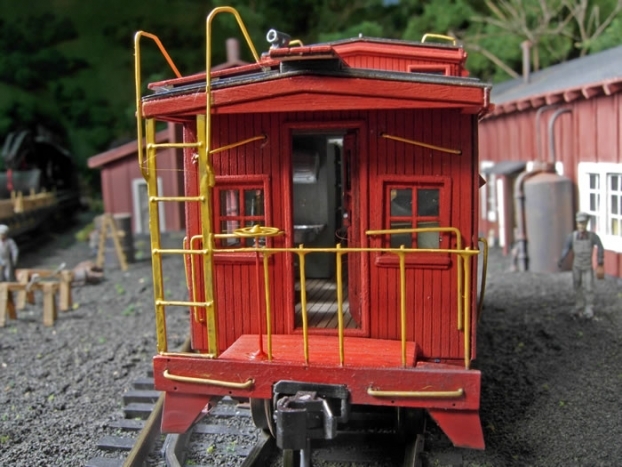 This is an advanced kit, but it is extremely well engineered and well made. The parts are accurate and fit together very well with little trimming. Using care, a very nice model can be built. My BC&G crews are extremely happy with their new crummy (Figure 9) and so am I. I highly recommend this kit to anyone who is interested in this classic wooden caboose. 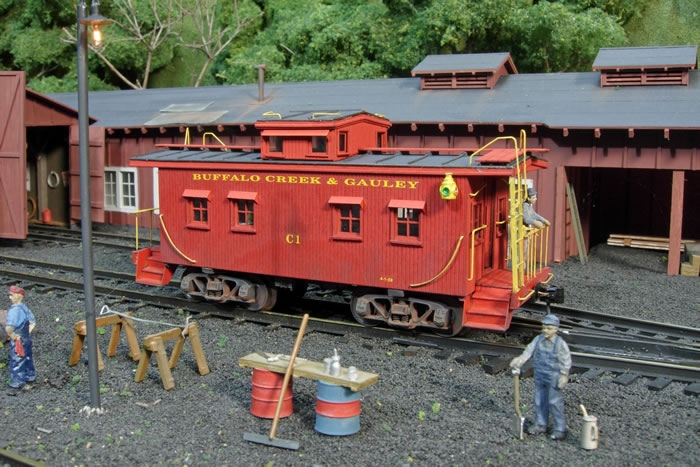