Breaking Marley’s Chains – On2 to S
“Givens” don’t fit? Change everything for a better layout

This article first appeared in issue 45 of the “Layout Design Journal” the publication of the Layout Design Special Interest Group, Inc. The S Scale SIG would like to thank the LDSIG for permission to reprint this article. Learn more about the LDSIG at www.ldsig.org.

Making the Switch to S

I’m relatively new to S scale, having started my first layout in 1:64 in October of 2011. My conversion to S actually started several months prior to that as I considered what prototype I could model in S scale and what would fit in my layout room.

Rather than write a feature on switching to S for an S-specific site such as this one, I thought it more valuable to share my experiences with a broader audience – one comprised of modelers working in a range of scales and gauges. So I penned a piece for the Layout Design Journal – the excellent quarterly publication from the Layout Design Special Interest Group (www.ldsig.org). This appeared in issue #45 – the Winter 2012 edition.

I have to admit that I took an unusual route into S scale. I had several friends working in S but until about a year ago, I hadn’t considered it as the scale for me. As the LDJ feature explains, instead of deciding, “I’m going to work in S” and then figuring out what I could do in it, I asked myself, “What do I want out of a layout – and what’s available, product-wise, to make it happen?” All scales and gauges were on the table – but I found that S standard gauge would provide the best combination of models big enough to appreciate detailing efforts yet small enough to fit an interesting layout into a relatively modest space. I also found the social aspects of working in S to be second to none and I’m grateful to have such a fantastic group of friends in my area who also work in 1:64.

Shortly after the feature was published, a comment on an S scale newsgroup made me realize those looking at S as a potential modeling scale might find my experience valuable. So I contacted the Journal’s editor, Byron Henderson, and secured permission to share the article on the S Scale SIG website. You’ll find it here as a PDF. If you’re not a member of the LDSIG, I encourage you to join. I find it great value for the money and the Journal is a tremendous magazine. Membership information is included at the end of the PDF.

If you’re considering the switch to S scale, I hope you find this feature informative and encourage you conduct an exercise similar to what I’ve outlined. 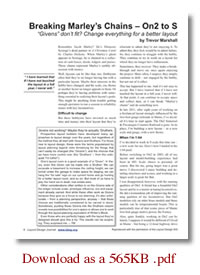