Photos by the Author except as noted 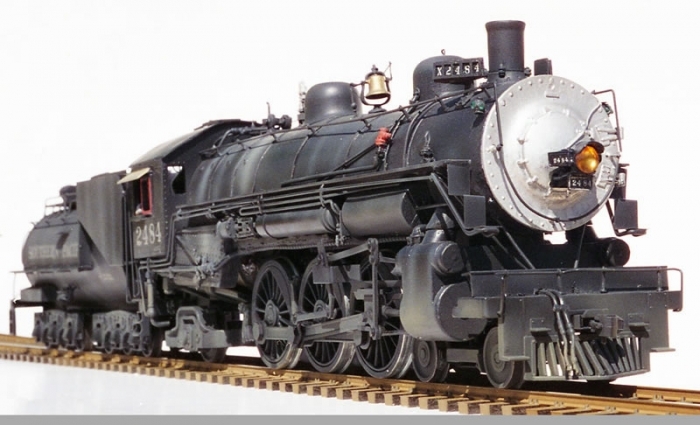 The arrival of American Models’ new Pacific was greeted with great enthusiasm.  For most people, just the production of the first new S scale steam locomotive in a generation was enough to get excited about.

However, for those of us who have been superdetailing American Models’ Geep and FP-7 diesels over the years saw even greater kitbashing opportunities with the new Pacific model.  I knew I had to have one of these fine running locomotives, but as a modeler of western railroading, I was not certain how best to modify the Pacific for my favorite prototype.  The answer came with the July 1997 issue of Mainline Modeler, which had an article on the Southern Pacific P-10 Class Pacifics complete with 3/16″ scale plans.

The American Models 4-6-2 is modeled after the USRA heavy Pacific.  Their B&O version is intended to approximate the P-7 “President” series, numbers 5300-5319, delivered in 1927 by Baldwin.  Jeff Madden did a fine job of discussing the history of these B&O engines in the December 1997 NASG Dispatch.  The article includes plans for both the “as-built” and “as-modified in 1930” versions.  Jeff’s article should be sufficient to motivate any B&O modeler to try modifying the engine to any of several specific prototype locomotives.  Most of these projects require only minor changes involving adding castings and minor detail revisions to produce a specific engine. 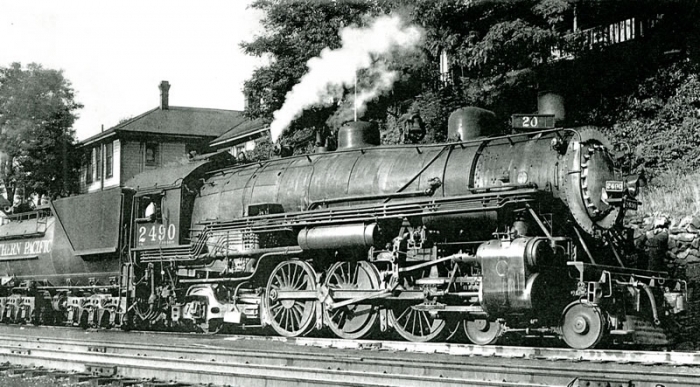 This project covers the process of making major modifications to the American Models Pacific to create a reasonable model of the Southern Pacific P-10.  I selected the Southern Railway version of the AM 4-6-2 as a starting point because it came with the six-wheel tender trucks needed for the SP conversion.  I must confess it took considerable courage to begin the disassembly of the good-looking stock model.

Once begun, however, the process was far easer than I imagined, and the results were worth the effort. 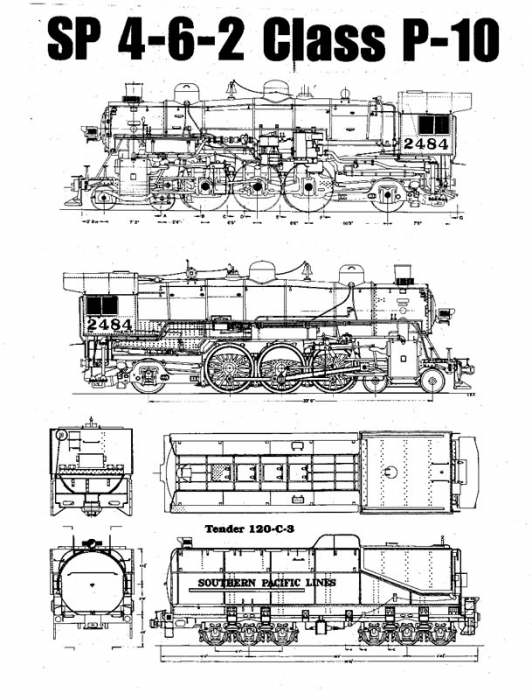 I closely followed the photos and excellent plans by Al Armitage in the Mainline Modeler article.  The overall dimensions and boiler/cab shapes were very close to the Espee locomotive.  By using a combination of S and HO scale castings, I was able to produce a good approximation of the prototype P-10.  The same methods I used for the Southern Pacific P-10 modifications can be used to convert the American Models 4-6-2 into prototypes for most roads using locomotives based on the USRA heavy Pacific.

Southern Pacific’s P-10s were the last new 4-6-2s received by the Pacific Lines of Espee.  They were the direct descendents of the highly successful P-8 Class (#2461-2475).  A total of 14 P-10s were delivered by Baldwin in October 1923 #2478-2483) and April 1924 (#2484-2491).  Like the P-8s, the P-10 class engines were designed to provide power for Southern Pacific’s long haul name passenger trains like the Overland Limited, Pacific Limited and Fast Mail.  They were able to make the 536-mile run between Salt Lake City and Sparks, Nevada without the customary engine change at Carlin.  They were able to do this hauling 11 heavyweight cars (weighing 875 tons) over a 1.5% grade, eliminating the many helper districts on the Overland Route. 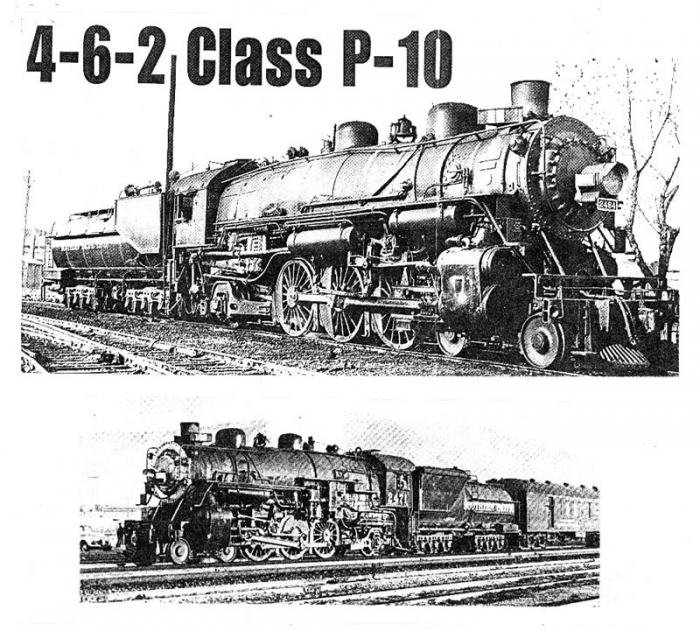 The new P-10s were nearly identical to the successful P-8 class.  They weighed 300,000 lbs.  Eight of these locomotives eventually received the Espee “skyline” casing, inspired by the GS Class “Daylight” 4-8-4s.  Three (#2484, 2485, 2486) were rebuilt, streamlined and painted in Daylight colors for service on the new “San Joaquin Daylight” in 1941.  Like all steam locomotives, each P-10 developed its own identity as various modifications were made over the years, including the removal of air tanks and the Delta booster engines and the addition of air horns for commute service.

As the larger Mountain and Daylight locomotives took over the name trains in the late 1930s, the P-10s were relegated to secondary passenger and freight service.  They worked right up to the end of steam on the Espee, sprinting Harriman suburban cars in commute service between San Francisco and San Jose on weekdays and racing long freights up and down the California central valley on weekends.

The first of the P-10s to be scrapped was #2478 in January 1954.  The last was cut up in Los Angeles, #2487, in July 1959 … nearly three years after the Espee dropped the last fires of regular steam service.  One P-10 (#2479) was saved for display along with two P-8s.  The #2479 has been on static display for many years at the San Jose fairgrounds.  One of the P-8s (#2472) has been restored to active steam service after many years of display in San Mateo and is currently stored and operated for special events on the Niles Canyon Railway at Sunol, CA.  The second (#2467) was restored to operation for Rail Fair at the California State Railroad Museum in Sacramento, CA by the Pacific Locomotive Association.  It is currently out of service and displayed inside the roundhouse at the museum after suffering a blown cylinder head.  The #2479, like its older sisters, is now also receiving serious restoration efforts with the hope that it too may steam again.

The most difficult step in the entire project was the first:  Beginning the process of cutting away all of the detail from the stock boiler casting.  I used a motor tool with several; cutting bits to remove all of the detail from the boiler shell, including the two domes, stack, running boards, piping, tanks and power reverse.  When this task was accomplished, I spent several hours filing the boiler smooth with both a large flat file and smaller jeweler’s files.  The cavity created by removing the sand dome was filled with Squadron Green putty, as were all handrail and marker light holes.

Once the boiler shell was smooth, the re-assembly process could begin.  This was the fun part!  The difficult part of this process was the measuring and cutting of the new running boards from sheet brass.  I began by making cardstock patterns to ensure the running boards would match the contours of the boiler.  The motor tool with a cutting disc was then used to make the rough cut in the brass stock.  I then filed these pieces to achieve a tight final fit.  Brass wire pins were soldered to the finished running boards to fasten them on the boiler.  Holes were drilled in the boiler shell for the running boards and the wire pins on the running boards were inserted into these holes.  The completed assembly was glued in place with ACC (cyanoacrylate cement).  This method has proven to be very strong and has held up well with prolonged use.

Next I formed and soldered brass wire to brass strapping material to create the sets of air piping for both sides of the locomotive.  The brass strapping supports were then soldered to the undersides of the new running boards.  The larger replacement castings were added next, including the stack, domes, injector, lubricator and turret.  Boiler bands were constructed from .10 x 1/16″ styrene strip and added to the boiler with ACC.

The large switch inside the cab was removed, along with the factory plug system.  This allowed me to add a styrene firebox extender to cover the flywheel and provide a platform onto which I could add the appropriate cab detail.  I used Cal-Scale HO castings for the throttle, air brake stand, oil valve, reverse quadrant and gages.  Actual glass windows and Arttista figures were added after painting. 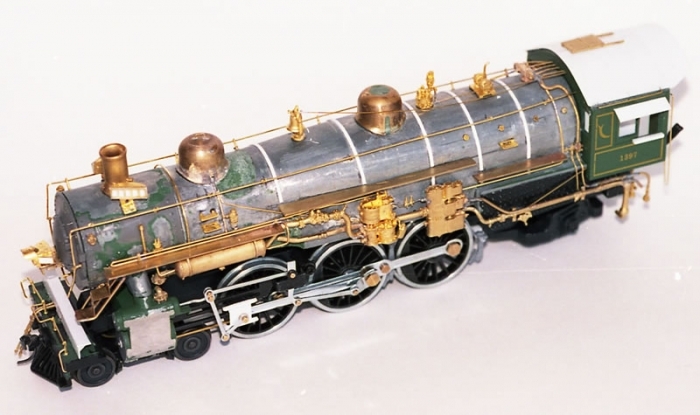 The PBL Sunbeam headlight was cut from its base and remounted on a River Raisin headlight bracket.  This assembly was then ACC’d to the boiler front along with the new stanchions and hand rails.

A full width step assembly was constructed from styrene and ACC’d to the pilot platform along with air and steam lines.  Handrail stanchions and brass wire were used to construct the coupler lift bar and this was added, together with a Kadee #5 coupler, to the pilot.  River Raisin makes a complete brass pilot assembly using the Espee’s unique pressed-pilot and this assembly has now been installed on my P-10.

The crosshead was modified to resemble the correct Walschaert valve gear and a lower crosshead guide added to complete the illusion.  Precision plastic locomotive brake hangers and shoes were added to the back two sets of drivers and a brake shoe assembly was fabricated using brass wire and Precision plastic brake shoes to the pilot truck.

The prototype P-10s carried large four-hatch Vanderbilt tenders.  Having no desire to fabricate one of these complicated monsters from scratch, I obtained a four-hatch C-100 tender from SouthWind Models and equipped with the six-wheel trucks from the original American Models tender.  The still larger C-120 tender was imported in brass by River Raisin and is also an appropriate tender for the P-10.

Because I use a PFM sound system, I removed the American Models chuff and smoke feature from my model.  The tender was then rewired with a new connector plug to replace the original oversize switch and plug arrangement.

The locomotive was airbrushed with Accu-Paint black and weathered with various Floquil colors to resemble an engine after moderate use.  Numbered 2484, the model is intended to represent the prototype during 1940 when it was equipped with a working Delta booster truck and feedwater system (prior to streamlining).  The resulting model provides the unique image of the prototype Southern Pacific P-10, yet retains the fine running qualities of the original American Models Pacific.  I hope this conversion example provides an incentive for others to try their hand at creating their favorite USRA-style heavy Pacific, be it the easier B&O super detailing project (see Brooks Stover’s article elsewhere on this website) or a major conversion to something like Union Pacific’s massive 2900 or 3100 Pacifics. 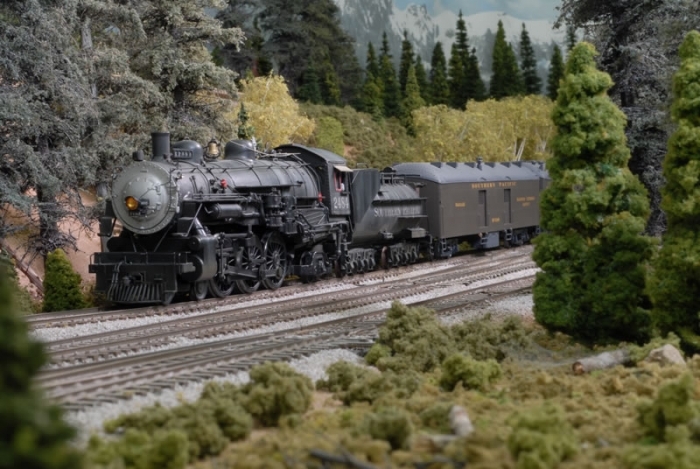 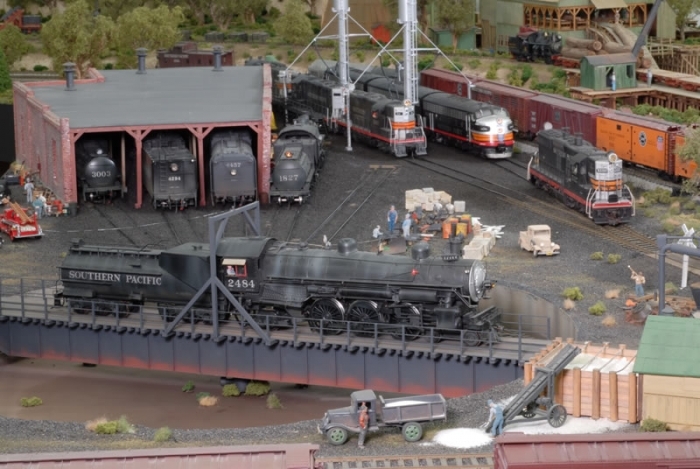 All the model photos were taken by the author.  They represent the various stages of construction described in the text, as well as the finished model.  The prototype photos were, we think, taken by William Raia.

The model photos show a shorter-than-prototype three-hatch tender that has since been replaced by the proper four-hatch tender from SouthWind Models, refitted with the same American Models trucks described in the text.