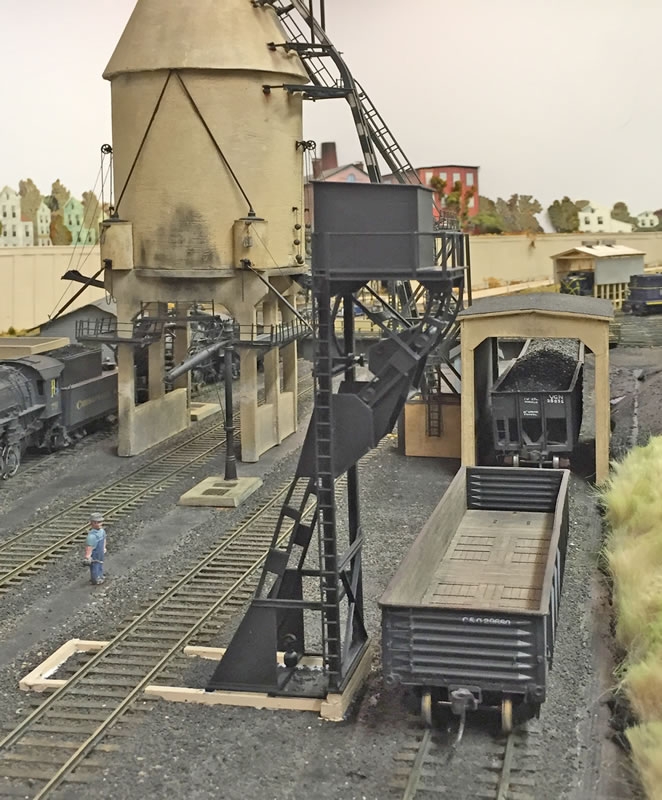 Many Chesapeake and Ohio fans are especially drawn to both the operations and the structures at Hinton, West Virginia. In addition to the obvious coaling tower and the many smaller service structures, the Fairbanks-Morse cinder conveyer really stands out. A cinder conveyer is an interesting structure typical of steam engine facilities before and during the transition era. Steam locomotives dumped the cinders and ashes from their ash pans into a large bucket at the bottom of an ash pit. A hoist house at the top of the structure conveys the bucket out of the pit and up the structure along the sloping guides, where the bucket waits for a hopper car or gondola into which to dump its contents. 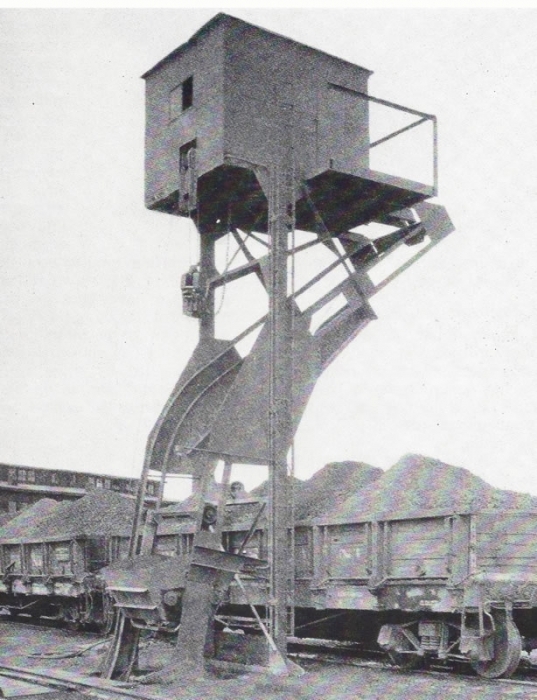 William E. Simonton of Virginia happens to be a skilled architectural and mechanical draftsman who has become the go-to source for many items of interest to Chesapeake and Ohio fans, especially the structures at Hinton. Mr. Simonton makes these available on his Shapeways site as 3D printed structures under the shop name ClimaxShop, Hinton (https://www.shapeways.com/product/2PLTQY48Q/s-fairbanks-morse-cinder-conveyor-1-track-2-0?optionId=58728647). These are produced primarily in HO, but Mr. Simonton allowed me to prevail on him to produce both the single and double track versions of the F-M cinder conveyers in S. (He also produces a standard C&O tool house in S and the gables standard to the C&O’s iconic Quinnemont cabin and Marlinton type station in S.)

Right out of the box this entire structure is printed in one piece. It has only to be washed with a mild solvent to remove any residual printing support wax and painted. For this purpose I used VM Naphtha and then painted with quality fast-drying flat black enamel. Reproduction of details is excellent, with the spaces between the spokes of sheaves fully evident, for example, and every piece and plate on the prototype is reproduced. There are inherent limitations to 3D printing though. These mainly occur in large flat surfaces that may show tiny steps or ridges as they are printed. These are not objectionable on the model I purchased and, once weathered, hardly noticeable. 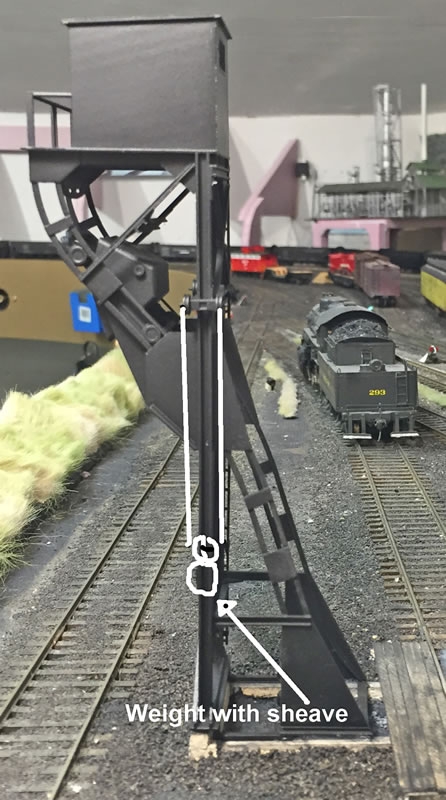 Of course the units are not rigged with the cables that raise and lower the bucket, which is printed in the raised position to be visible and to support the somewhat frail superstructure. Therein lies the rub, because the available pictures and drawings do not do justice to the cabling. Fortunately, using a series of photos and the drawings in the F-M catalogue, we were able to work out the cabling which was continuously wound on a drum in the hoist house. As an assist, I will show here how I believe the cabling was arranged in a series of photos with overlays.

The first order of business is to detach the weight with sheave from the front tie bar, as it will go on the main left rear “I-beam” column of the structure when facing the three windows (Figure 5) in the hoist house. See Figure 4. 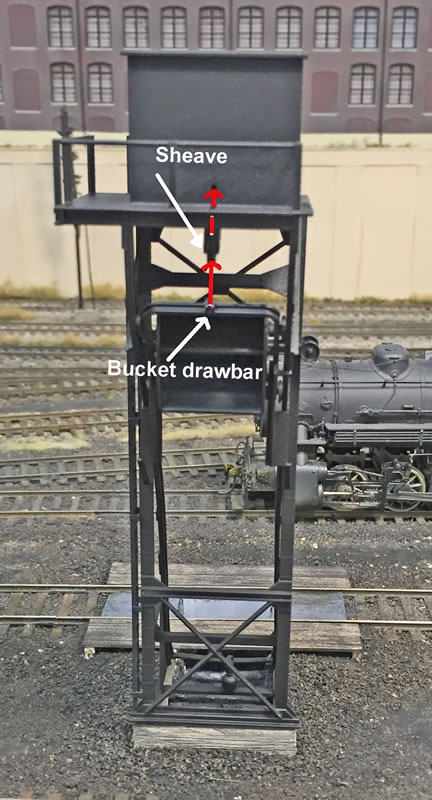 My first rigging step was to attach the draw line, made from clear 15-pound nylon fishing line, from the hoist house front wall slit through the platform and into the indent in the top bucket drawbar. See red lines in Figure 3.

The second step is to attach the orange return line to the bottom bucket drawbar and then run it to the middle, slightly canted, pulley, the leftmost of the three P’s in Figure 4. 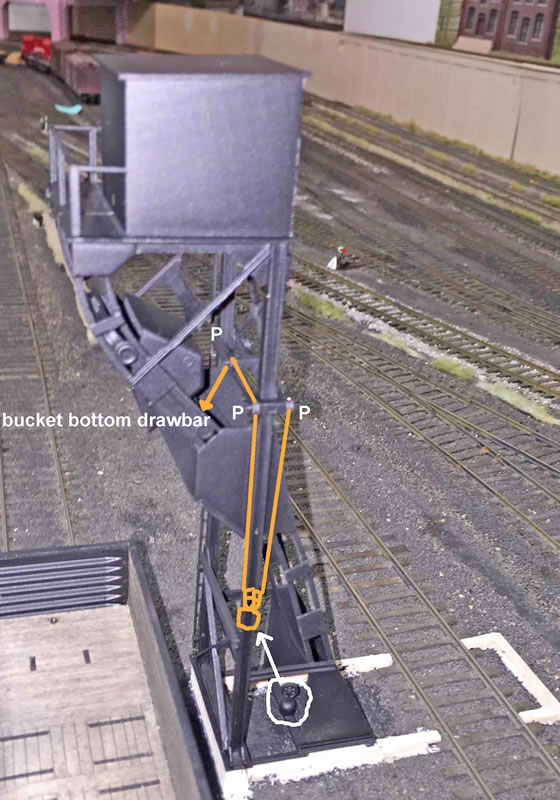 Next I attached the weight and sheave to the I-beam in approximately the position shown in Figure 2 when the bucket is raised, so then when it is lowered this counterweight keeps tension on the cables. I glued it so that the 15-pound line could be pulled taught and glued into the sheave grooves.

Now it’s time to rig the return line that goes over the rightmost pulley in Figure 4 and across the front of the structure to the slightly canted pulley on the right and then descends into the ash pit on pulleys along the pit’s right wall. See Figure 5. 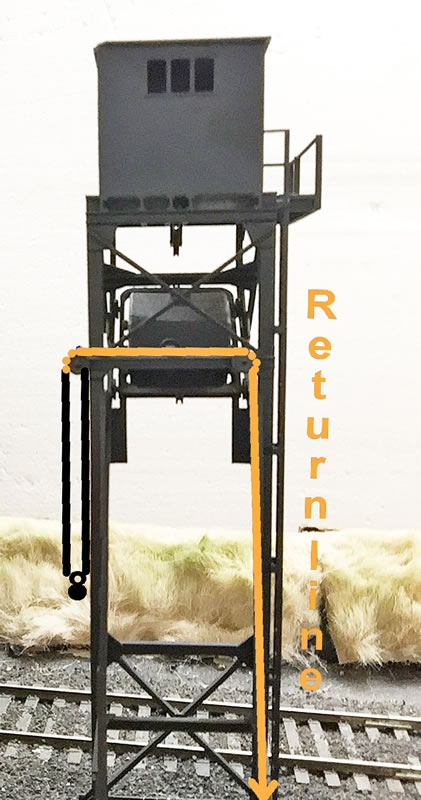 Mr. Simonton also supplies the exact dimensional pits for single and double tracks on his Shapeways site. However, my tracks had long been installed and were slightly off the proper centers to use his pits. I fashioned my own from scrap wood for the frame (Figure 3) and walks, and a formed metal bin between the rails over the bucket. Fine mesh screen was added on each side of the bin between the rails to simulate inward sloping pit extensions with a grating covering them. A typical railing and grate rakes were positioned opposite the structure. The prototype photo shows typical steam piping, lighting and tools found in these areas.

One word of caution is in order: the recommended Frosted Ultra Detail material takes acrylic and even fast-drying lacquer well and is easily glued with ACC. However, it is somewhat more brittle, for example, than styrene, I have taken special precaution not to permanently fix this model to the base because of its more fragile construction and because it is at the front of the layout. 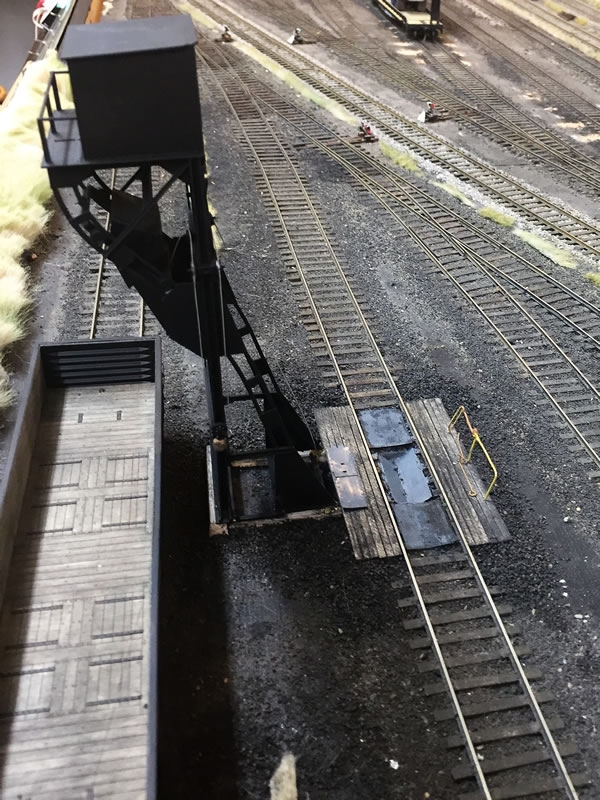 Learn more about Hinton at the C&O Historical Society site at www.hinton.cohs.org.