Ditch lights were added later; the units did not have these when built. (See black-and-white MLW builder’s photos). I modeled the as-built configuration, as my layout is circa 1955. The paint job is also per the original, with green handrails and black kickplates. (Note the differences between the builder’s photos [B&W] and the later color photo.) 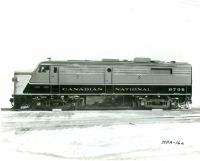 The loco started out as a lot of “stuff,” primarily a powered AM FP-7 chassis, an American Models Alco FA shell from a swap meet that some inexperienced modeler had severely damaged while trying to add a second headlight opening, and a bag of SouthWind Alco FA/FB detailing parts.

I referred quite often to James Whatley’s article on converting an HO FA-2 to a CNR FPA-4 in the January 2013 Railroad Model Craftsman. I relied heavily on this article for suggestions on how and what to do to create my loco. A chat with Andy Malette confirmed that the rear features and color of the FPA-2 and FPA-4 were identical.

I did a lot of work on the carbody. The unpainted model photos pretty much highlight what I did. All the brass parts were from the SouthWind FA/FB detailing kit. Handrails above the coupler lift bars, and the lift bars themselves, are formed from .020″ steel wire. The cab awning is a piece of styrene sheet. The stainless-steel Farr Grilles are a Des Plaines Hobbies product, intended for EMD units. I narrowed them with a coarse bastard file in order to fit the FPA-2 grille areas.

The winterization hatch as well as the flat platform “thingy” were built up of layers of styrene sheet, files, sanded, and filled to achieve the correct contours according to the RMC article. The larger of the two vents over the train heat boiler (rear of roof) is an O scale trolley car pole retriever. The smaller vent is an S scale coach lavatory vent. The grab at the left rear of the roof is another piece of formed .020″ steel wire.

The front coupler in the unfinished photos, a San Juan Car Co. “Evolution” coupler, was replaced after painting. Both couplers are now Kadee #808s.

I replaced the AM Blomberg sideframes with SouthWind AAR Type B sideframes built from parts in the SouthWind FA/FB detailing kit. The fuel tank is built up of styrene sheet overlaid on the AM chassis’s underfloor fuel tank. The various bolts and clean-out plugs are from the SouthWind FA/FB detailing kit. The fuel level indicator on the left side of the tank was made from a brass relief valve from a SouthWind A-B brake set plus a length of brass wire. The fuel pipes on the front left of the tank are simply formed brass rod. The side steps are from the original FA carbody shell.

I used the color prototype photo as a guide for painting and lettering. All paint is Scale Coat, airbrushed. The first coat is CNR yellow, no longer available in the US. I sent the completed body shell to Andy Malette, who sprayed the entire carbody with the correct CNR yellow. When I got it back, the masking began. Next came CNR green, which I had, thanks to the NASG’s CNR Pullman Car remediation program of some years ago. I masked the yellow, including the striping, and oversprayed the green.
Then I masked again for the black, including the thin one-inch black stripes that divide the green from the yellow along the bottom of the carbody.

After peeling off the masking tape and letting the paint cure for a week, I began decaling. I had a lot of striping left over from the NASG remediation program, so I used the stripes of yellow bordered with black to finish the black stripe wherever yellow meets green. Curves in the stripes were achieved by repeated applications of decal solvent accompanied with teasing the stripe segments with a No. 11 X-acto blade. Some of the black striping done by masking was rather ragged, so the decal stripes were overlaid on these to clean up the look. The sharpest curves were not outlined with these leftover passenger-car stripes (but see next paragraph).

The lettering and herald came from a Black Cat decal set for CNR diesel units. Also, portions of the black “O” in “National” were cut and fitted to the sharply curved color boundaries.
Finally, the handrails were all repainted by hand with CNR green, per the color prototype photo. A cardstock mask behind each handrail served to protect the carbody color from paintbrush mishaps. Then the entire body shell was given an overspray of Floquil “Flat Finish.”

Clear plastic windows, lenses, and number board decals were applied last; the number boards were then hand-brushed with clear nail polish.

The chassis was next. I masked the couplers as well as everything above the floor, then painted the entire chassis with a spray can of Floquil Grimy Black. Then I removed the truck cover plate/sideframe assemblies, separately painted the wheels, and cleaned the treads with lacquer thinner.