A River Runs Through It

reviewed by Chris Rooney
photos by the author except as noted 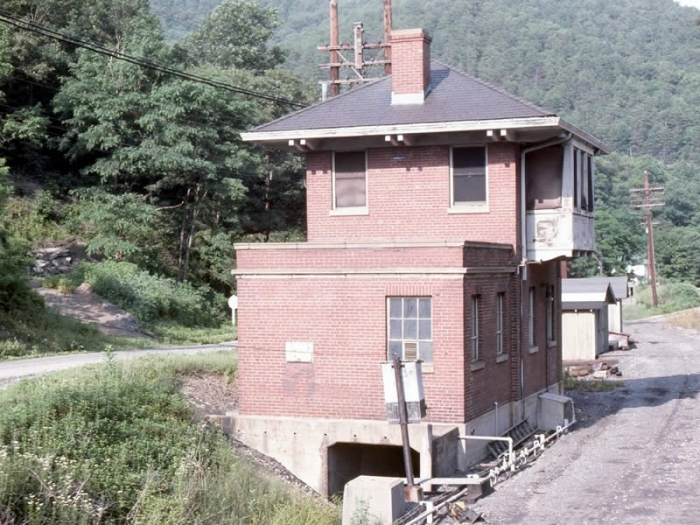 Figure 1 shows the prototype for this Alkem Scale Models S scale kit, the Chesapeake & Ohio’s Alleghany Cabin (tower), which lies 29 miles west of Clifton Forge VA and 51 miles east of Hinton WV, at the summit of the Alleghany Mountains. During the steam era, helpers stationed at Hinton were turned at Alleghany to return to Hinton. Alleghany was a busy place with 30 to 40 train movements a day. In 1936 a new tower incorporating all the latest technology replaced the older manually operated tower. In the new arrangement, turnouts at Alleghany were operated by electro-pneumatic switch machines (hence the piping seen in earlier photos of the cabin). Low-voltage electric switch machines were used at Tuckahoe, East Alleghany and Jerry’s Run forming a five-mile-long CTC installation. And yes, not quite a river, but a stream did run through, or better said under, the building as seen in this late 1960s – early 1970s prototype photograph (courtesy of North American Interlockings at www.northamericaninterlockings.com).

Inside the tower, the CTC-type control machine in is arranged in two panels, the end section at the right being set at an angle with the main section, so that the operator can readily reach any of the levers without leaving his chair. The machine has 15 levers for the control of 7 single switches, 2 derails and 6 crossovers; 23 levers for the control of 44 signals, 2 traffic levers and 4 levers for the control of electric switch locks and as selector levers on hand-operated switches. The levers are of the usual miniature type, each lever being equipped with indication repeater lamps, so that the leverman knows the position of each switch and the aspect of each signal. An illuminated track diagram, mounted just above the levers, indicates the location of all trains on the main tracks in the five-mile controlled territory.

The tower without the base is 25 (scale) feet wide over the roof eaves by 37 feet long with the annex, or 25 feet square without. The stairs are fully covered by the roof over-hang. With the base, my model is 48 feet long by 29 feet wide.

The kit is not a shake-the-box production, but rather the kind of a kit that a professional model builder (i.e. Alkem’s owner Bernard Kempinski) would make for himself. That should not be taken as a put-off though, as this a very pleasurable and rewarding kit to build. Rather than repeat all of the instructions here, I will just add tips and work-arounds that I found while constructing the model.

The kit is laser cut from sheet acrylic plastic (Plexiglas) and the stairs and windows are cut from a very thin but strong micro-plywood. I have done a little work with Plexiglas and find it to be an excellent medium, requiring no internal stiffening (unlike many modern laser-cut wood or styrene kits). However, a couple method changes are needed to deal with it. First off, acrylic is transparent, so sorting out the walls and roof before painting is like losing your rimless glasses on the work area after putting them down. This problem is solved by using a piece of black construction paper to help define the edges of pieces and by liberally marking all the pieces with a magic marker, which won’t mar the acrylic and wipes off with alcohol.

The walls come precisely cut with nicely defined mortar lines around the bricks, and the edges that have exposed bricks are cleverly cut through to match the facing bricks. I used a magnetic positioning setup with machinist squares to get the walls as square and close-fitting as possible. I used Plastruct Plastic Weld cement for all plastic joints. It’s wise to mark all the critical matching points and cut out notches in the floors for lighting wires at this stage. 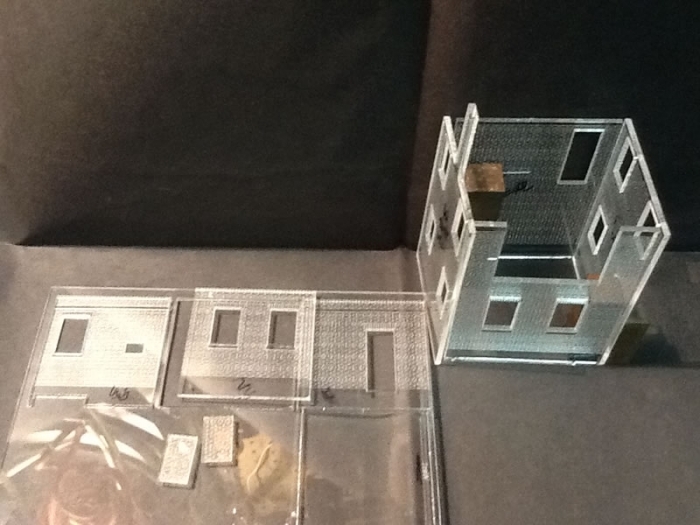 The annex goes together the same way. You can decide whether you want to attach the gutters to the sides now or mask and paint then glue them on. I added a 0.030 x 0.125 evergreen capstone to the tops of the annex walls after painting, as the structure looks a bit bare in S scale without them.

Roof construction is straightforward per the instructions with one caveat. Mark the pieces and be sure the base piece with corbel holes is properly aligned with the chimney hole and its mating roof piece so that the side with no corbel holes is over the bay (voice of experience). Also be sure to mark off the short special corbels that go under the bay window; these are found under the chimney cap pieces on the corbels’ acrylic sheet.

Now it’s time to mask and paint. I masked off the base, window sills, and the top of the walls above the bricks until the red oxide primer for the bricks was sprayed and the bricks were finished so that the mortar did not get on these surfaces prior to painting. If you have not already joined the annex to the tower, don’t forget to mask their mating surfaces for that. And a caution: If you intend to illuminate the interior, you will need to paint the interior even if you don’t do any interior detailing. This is because the walls will transmit interior light if painted only on the outside. 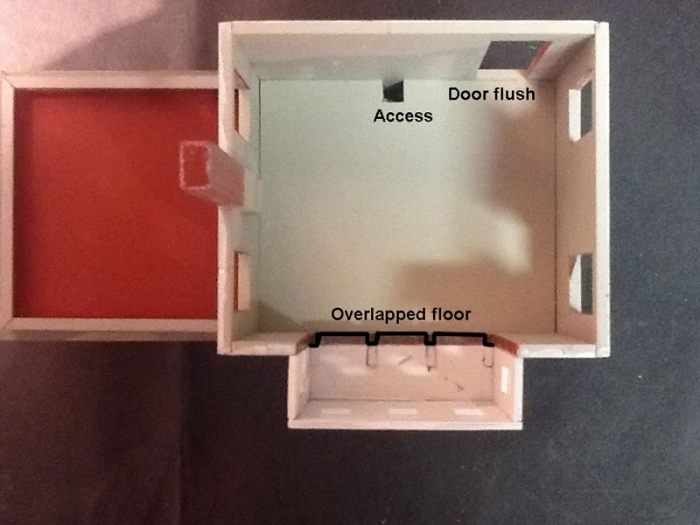 Everyone has a favorite brick-making formula, so I’ll just add mine. I used ACE red oxide primer SKU 1037605, Plaid No. 20575 “Sandstone” acrylic craft paint and denatured alcohol. Let the primer dry overnight, brush on slightly thinned craft paint, let this partially dry, and wipe off the surface excess with an alcohol-soaked paper towel. The more you wipe, the neater the mortar lines become. They can be darkened with an India ink wash if desired. After the bricks were done I used Model Master White Primer 2948 for the fascia board above the bricks and underside of roof and corbels. I sprayed the concrete surfaces with Model Master 36440 Gull Gray using brush-painted Plaid craft paint on the window sills.

The next step was the bay window. There is a kink and workaround in this step. The floor for the bay window is too wide. The solution is illustrated in Figure 4. It is necessary to cut down the width of the floor and realign the corbel cutouts as shown. Leave material toward the inside of the bay to overlap the second story floor (see Figure 2). 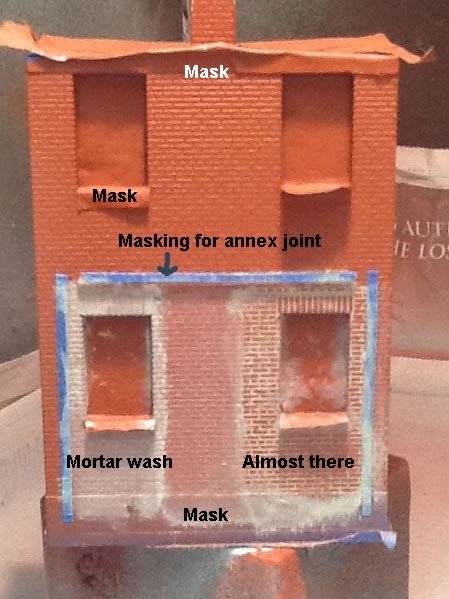 I put off the shingles for as long as I could. While doing this step I was constantly reminded of the words of my wise old roofer: “I drop a chalk line every two courses to make sure everything is parallel.” It would be a good idea to scribe such lines before assembling the roof, but if not, pay careful attention to keep the spacing of the shingles parallel and even. I coated the shingles with a light coat of decoupage to keep the shingles and the cap shingles from curling then sprayed the roof with Model Master Panzer Gray 36076. The box gutters supplied were not long enough on two sides and warped when painted for an unknown reason. I used square white strip wood with the dark gutter drawn with a Sharpie. I painted the annex roof with black gesso and sprinkled cinders over that.

Finally, I pondered the stairs instructions for a long time and then went my own way. The stairs make the model. They are delicate enough to look like the prototype grating, yet when assembled are sturdy enough to support themselves. I made a simple soldering jig by using the stair stringers as a guide; i.e., drilling through the holes in the stair stringer pieces for the first and second flights and soldered the railings from 0.020 half hard brass wires leaving enough excess at the ends to allow mating the two stair sections and inserting the upper end into the building.

The micro plywood frame pieces have some inscrutable cutouts that may be required for N or HO scale. I simply stacked two stair step pieces onto the stringers being careful to keep the inside and outside assemblies correctly referenced versus the building. When all steps and landings had been inserted I carried the upper outside stringer over the end of the lower frame, notching the risers as required. I butt-joined the inside upper stringer to the lower one as shown in the underside photo (Figure 5), keeping as close to a 90º angle as possible. I attached the railings and joined them at the junction between the upper and lower rails. Paint is Panzer gray. I also installed a plate across the end of the top landing. 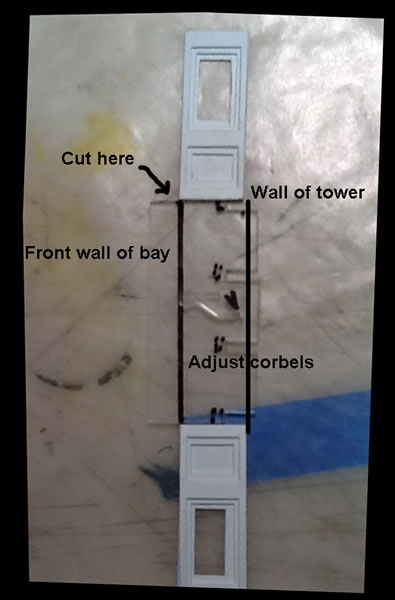 I made a base out of Plexiglas scrap to protect the stairs and give the cabin a small setting of its own. The stream tunnel, bridge and bases are model scraps. The electro-pneumatic piping is simply a sprue left over from another project. The nearly finished model is shown in Figure 6. I haven’t decided how much to weather it, but it is clear from B&W steam era photos that it wasn’t as pristine as shown here, and there may have been screens on the windows. 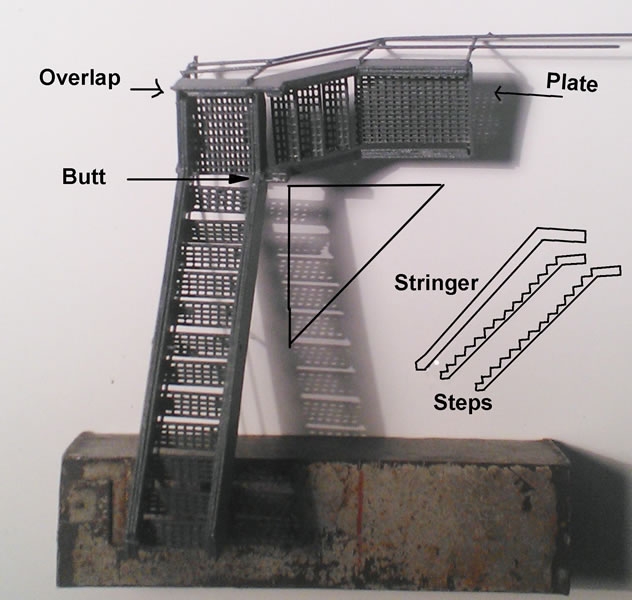 I am very pleased with the Alkem C&O cabin, and am looking forward to “planting” it on my layout. 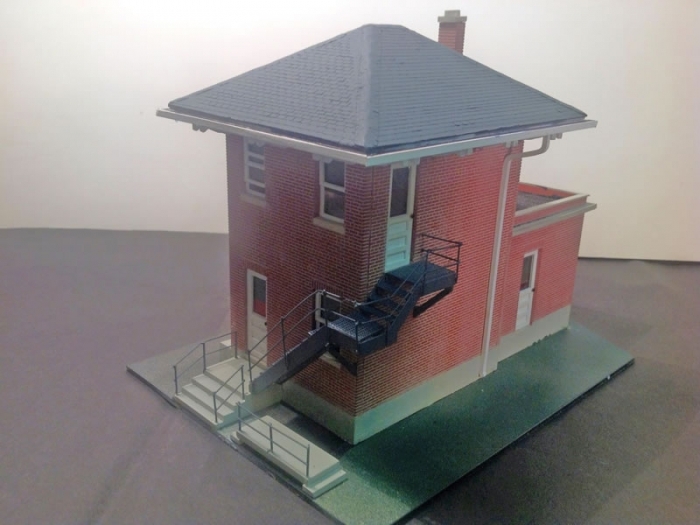 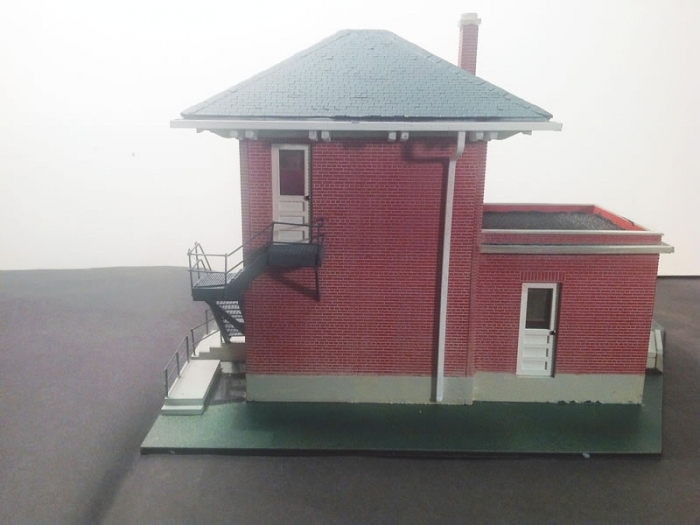 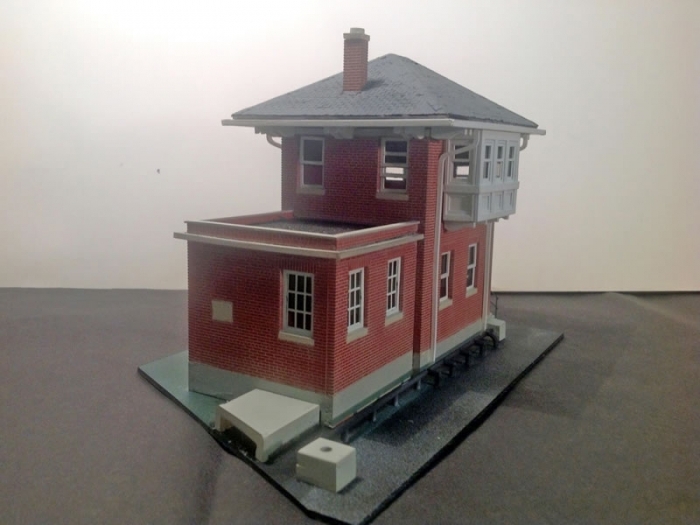 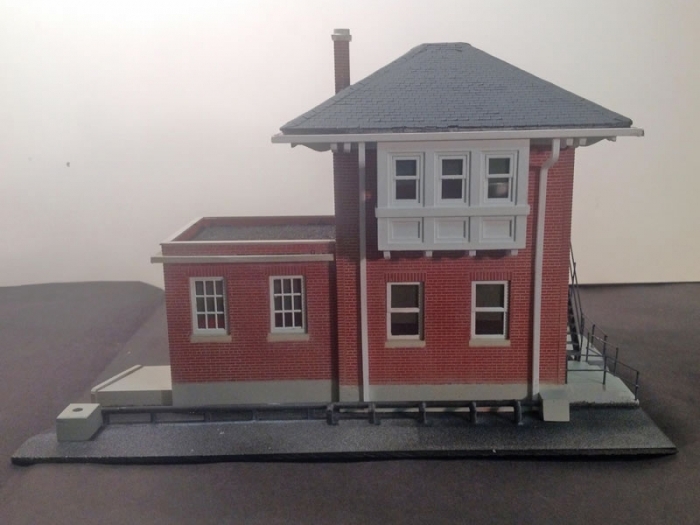 This tower, characteristic of the standard design C&O adopted in the 1930s, is quite suitable as a representation of modern towers elsewhere in the U.S. As inspiration, a PRR standard 8- to 20-lever tower with a pop-up dormer above the bay is shown in Figs. 11a and 11b at York, PA. Another tower at Duplainville, WI on the Soo/Milwaukee is shown in Figure 12 without the bay but with nearly identical dimensions. These would be fairly easy kitbashes. 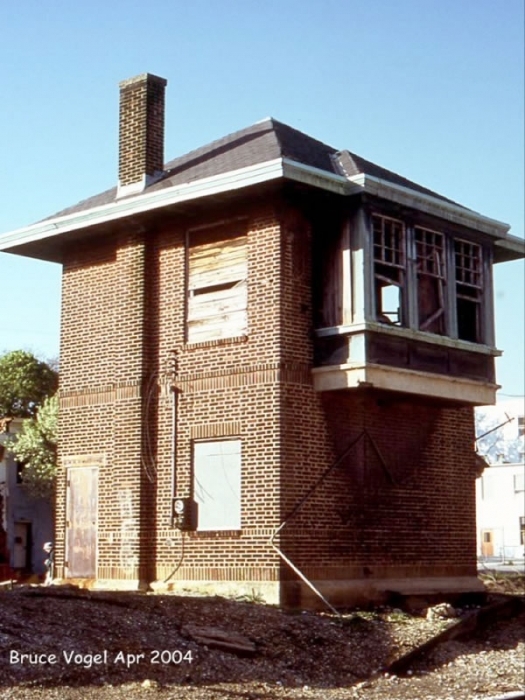 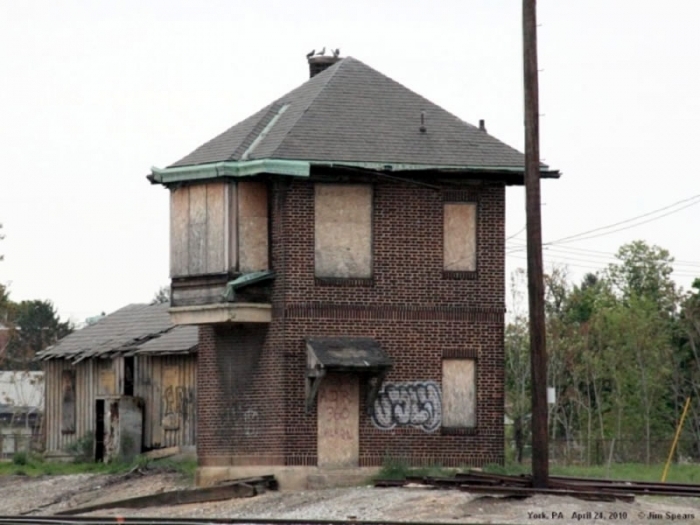 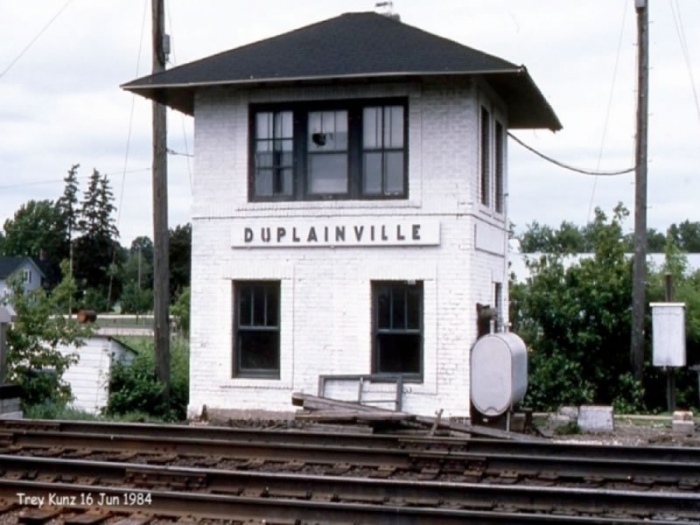 1 From Railway Age, August 15, 1936. This and other reprints prepared by Tony Liccese and photos are available from the Chesapeake & Ohio Historical Society.