by Dick Karnes
Photos by Gary Schrader except as noted

The USRA 2-8-8-2 locomotives, built by Alco and Baldwin, were
delivered to the Virginian, Norfolk & Western, Baltimore & Ohio, and
Clinchfield railroads in 1918 and 1919. Later, the Santa Fe, Pennsylvania,
and Union Pacific bought some second-hand from the N&W. The B&O
subsequently converted theirs to a 2-8-8-0 configuration. These
locomotives were compound articulateds, utilizing exhaust steam from
the trailing engine unit to drive the pistons in the larger cylinders on the
lead unit. These locomotives, with their 57” drivers, were well suited for
long coal drags at 30 mph.

This new S scale USRA 2-8-8-2, as conceived by Lionel, marketed under
the “American Flyer” name, and converted by SSL&S, is a real treat! Its
dimensions are accurate and detailing is thorough. Piping and fittings
are individually applied. It even has drive wheel brake shoes. The only
obvious compromise is that the steam exhaust pipes leading forward
from the rear cylinders are integral with the boiler casting, and therefore
do not actually connect to the cylinder chests. The reason for this is that
both the front and rear engine chassis are separately pivoted on the loco,
thus minimizing outward swing of the smokebox on curved trackage, as
well as allowing the loco to negotiate sharper curves. On the prototype,
the rear engine does not pivot.

The loco comes from Lionel painted and lettered for VGN, N&W, PRR,
ATSF, and UP. The N&W, with by far the largest fleet of these locos,
designated them Class Y-3; thus the Lionel nomenclature. The
locomotive comes with sound, smoke, and compatibility with AC, DC,
and TMCC Legacy, and American Flyer-compatible wheel profile. The
locomotive’s electronics suite senses the nature of the power supply and
automatically initializes itself accordingly. Lionel and S Scale
Locomotive & Supply Co. (SSL&S) have entered into a mutual
arrangement whereby SSL&S will replace the AF-compatible wheels and
driver tires with scale-profile wheels and stainless-steel driver tires per
the NASG/NMRA wheel profile and gauge standards. This conversion
service also includes a Kadee S scale tender coupler. (The front coupler,
a scale dummy, is standard on the Lionel product.) On request, SSL&S
will also program the built-in decoder for DCC compatibility. 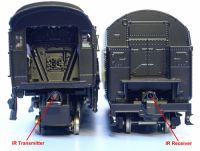 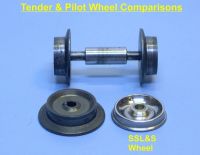 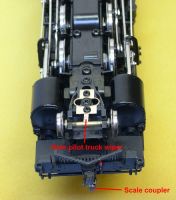 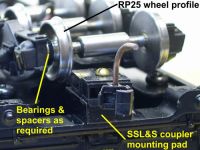 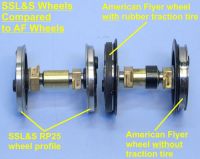 The locomotive and tender coupling is a simple hook-and-slot
arrangement. There are no wires between the two units. The tender
drawbar’s clever design provides extremely close coupling while
preventing the loco and tender bodies from interfering with each other
on sharp curves. The sound system, entirely contained within the
tender, is synchronized with locomotive performance via an infrared
signal transmitted from beneath the cab floor and received via a receptor
beneath the fireman’s platform on the tender. Sound volume can be
altered via a thumbwheel beneath the tender’s water hatch.

In addition to the usual steam locomotive sounds, the superb sound
system’s effects include brake squeal, amplified chuffing upon
acceleration, intermittent steam emission and crew chatter when idling.
The sound system electronics are very sensitive to electrical input
fluctuations, so Lionel has provided space and connections for an
optional nine-volt battery inside the tender. I highly recommend
installing this battery, which provides continuous current to the sound
system regardless of track-to-wheel current interruptions. Another
advantage of the battery is that it allows the sound system to bank the
fire after the DCC system is turned off. Yes, after turn-off!

I tested the locomotive using DCC. Electrical pick-up is through the
wheels on both sides of the unit. The loco weighs 3 pounds 7 ounces; the
tender weighs another 2 pounds 3 ounces. Loco pulling power, without
the tender, is 11.3 ounces at full slip while drawing .50 amperes. The
loco’s efficiency (pulling force divided by loco weight) is 20.5 percent –
an incredibly high number. The stainless-steel driver tires’ excellent
adhesion properties allow the loco to pull practically everything you can
throw at it. The loco begins to crawl at 3.4 scale mph at step 1 on the
DCC 28-step speed control table. Its speed at full throttle (speed step 28)
is 76 scale mph; the prototype could be wound up to 50 mph. Using
DCC’s configuration variables, the speed profile can be reprogrammed
to approximate the prototype if one wishes.

I had a problem with drive wheel set No. 1 lifting off the rails at the
beginning of downgrades. After much theorizing and tinkering, I found
that the pilot truck spring is much too stiff. I removed the spring and
did not replace it. To compensate, I added a quarter-ounce rectangular
weight to the top of the plastic lead truck frame to keep its wheels on the
track. MicroMark makes half-inch-wide peel-and-stick quarter-ounce
lead weights, perfect for this application. These simple alterations
eliminated the driver lift-off problem. And, although I did not retest,
elimination of the spring increases pulling power by transferring more
weight to the lead chassis.

The smoke unit can be turned on or off via a hidden switch beneath the
cab roof hatch. Lighting effects include a reversible headlight and tender
rear light, illuminated classification lights, red firebox glow, firedoor
flicker, and cab interior. 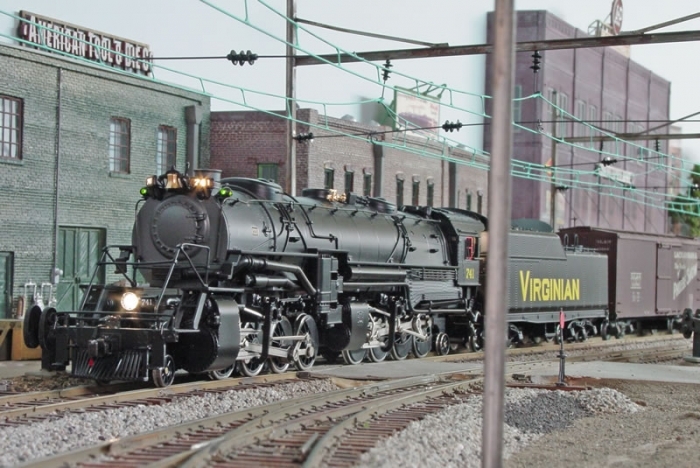 Lionel’s new USRA 2-8-8-2 in VGN livery powers a freight through the North Cornwall industrial district on Dick Karnes’ S scale NYW&B railway. Beautiful, isn’t she? Are those scale wheel flanges? … and a scale front coupler? Yes on both counts. But is it running on DC? Well, yes and no. It’s actually running on DCC! Is there sound? You betcha! Are those individually applied pipes and fittings? Well, … yes! The loco comes from Lionel ready for hirail, compatible with AC, DC, and TMCC. S Scale Loco & Supply (www.sscaleloco.com), owned and operated by Fred Rouse, has an agreement with Lionel to convert these locos to stainless steel scale driver tires, scale wheels elsewhere, and Kadee rear coupler; and add DCC compatibility.

Besides Virginian, the new Lionel S scale 2-8-8-2 is available decorated for Norfolk & Western (Class Y-3), Pennsylvania, Union Pacific, and Santa Fe. And how does she run? Stay tuned…!!