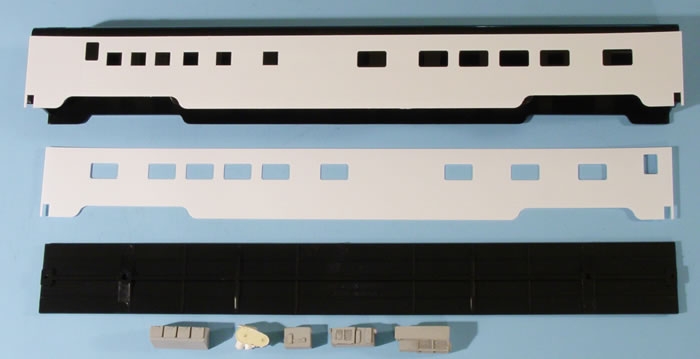 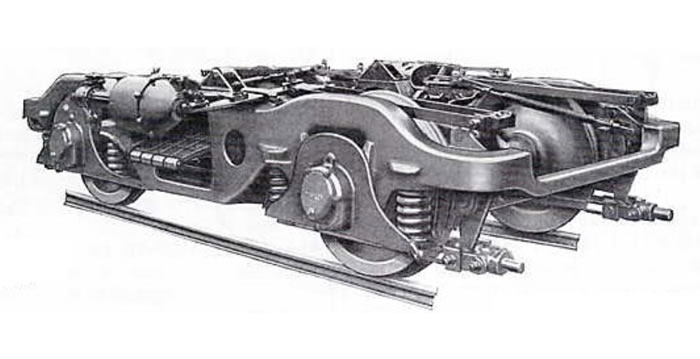 The kit builds two typical peaked-roof outhouses. This particular kit is front-gabled; kits for side-gabled and shed-roofed outhouses are also available (Nos. 216 and 218 [HO], No. 316 and 318 [S], same prices). As a Northern New Jersey teen-ager, I spent a fair share of my Boy Scout summer-camp time in outhouses. Even though my camp’s facilities were two-holers, I can tell you that this kit’s one-holers are quite accurate!

The two outhouses are very similar. The only differences are just two: The door of one has a diamond-shaped vent hole, whereas the other has no vent hole. Also, one outhouse has horizontal sheathing, whereas the other has vertical sheathing. Either door can be built with or without “Z” trim, and opening either left or right. You also have the option of using three blank walls or two blank walls plus a windowed wall.

Before cutting the parts from the frets, I brush-painted the parts with Floquil BN Green for the walls, door, and window sash, and Floquil Southern Green for the trim. I left the toilet seat and floor in their natural wood color.

The front wall is U-shaped because of the door cut-out. As such, it is much weaker than the robust side and rear pieces, which are solid or nearly so. Furthermore, the interlocking edges of the adjacent wall sections that form the vertical corners of the structure are extremely tight – So much so that dry-fitting is not possible. You just can’t force the parts together. The solution is to use a slippery adhesive like a water-soluble white glue. I prefer Aleene’s Original Tacky Glue because it begins to set up rapidly while still allowing some adjustment, and it dries clear and non-shiny.

Finally, glue the door frame in place. This piece, flimsy as it is by itself, will stiffen the front wall once it is glued in place. Then glue the floor, with toilet seat already installed on it, into the bottom of the entire wall assembly. This will “square” the building and trap the bottom of the front wall so it won’t go anywhere. Be sure to do this before the glue sets up permanently (about 20-30 minutes).

I contacted Wild West’s Mike Pyne to discuss this fit-up problem. Here is what he said:

“I started producing kits with a very calculated offset that would allow for assembly of the model without glue for a “dry-fit” as you mentioned. This allowed me a way to build a prototype structure without permanently gluing any parts so that I could change them if I needed to. It takes a lot of time to adjust all of the tabs, rather than just making the male and female parts the same in the drawing file. [This is because] when the laser cuts the parts, it burns away part of that line that it cuts, so if there is no planned offset, the pieces will fit very loosely.)

“It sounds like I might need to revisit the outhouses and check on their tab offsets! The kit should be able to have a “dry-fit” assembly, and, as you mentioned that it was not possible, there must be something wrong that I need to look at.

“On two of my upcoming not-yet-released S scale kits, I have modified the offsets just slightly. I hope this helps with the problem you describe.“

You will need to be careful with the corner-cap angle material because the four lengths are just enough for both outhouses. Instead of pre-cutting the lengths in half, I glued each uncut angle cap to the outhouse corners, flush with the bottom of the floor. Then, with a new No. 11 X-acto blade, I carefully cut the excess angle off, even with the slope of the roof. Then I did exactly the same with the second outhouse. You may have to try the angles in different corners to get sufficient length against the slanted side. The resulting shavings are miniscule.

The rustic shingle material is beautifully done. I applied mine with Aleene’s glue, which required me to be patient. This is because the last two tiers of shingle need to be trimmed at the ridge, which requires the glue to set up first. Alternatively, I could have used a thickened version of CA glue for much faster curing. Two ridge cap strips are included in the kit. I folded and glued the ridge cap in place on one outhouse. For the second, I chose to cut the individual cap shingles apart and apply them individually.

Construction of each outhouse should take about an hour for an experienced laser-cut wood kit builder, two or three times as long for a neophyte. If you are new to laser kits, this one’s the one for you. You will probably make mistakes, you will be able to recover, and you’ll get an automatic second chance to do better. And you won’t spend much money for the experience!